Flags are instantly recognizable symbols of places, and a flag tattoo allows someone to fly their flag 24/7, as well as serving as a reminder of heritage.

For people who have a great love for a place, flags are an instantly visible way to express that pride.

The same goes for organizations that fly flags — if it’s got a flag, you can fly it. Originally, flags were not flown as emblems of nations and organizations. They first achieved widespread use on the battlefield as a way for militaries to coordinate their actions amidst the chaos of war.

They continued to see use as a visual signaling system when communicating by mouth was impossible for centuries afterward – for example, on the sea, where boat crews could identify each other and signal their intentions from a distance.

By the late 18th century, nationalist sentiment was rising, and the first national flags appeared. Now, they’re deeply ingrained as a part of any place’s cultural identity, and having that symbol inked on one’s body is a way to tap into that identity. The simplest, most straightforward designs are of a given flag’s emblem rather than an actual textured flag.

The advantages of this are

Many designs, however, try to capture the look of an actual flag with wrinkles and creases, often as if it’s flying high and catching the wind. These kinds of designs don’t necessarily need to be rectangular, which may be an advantage depending on the part of the body being worked on.

Skin rip variations have also seen some use.

These designs simulate the flag being beneath the skin as opposed to on it, symbolically saying that the person is a patriot on the inside, fully representing their nation on the inside. 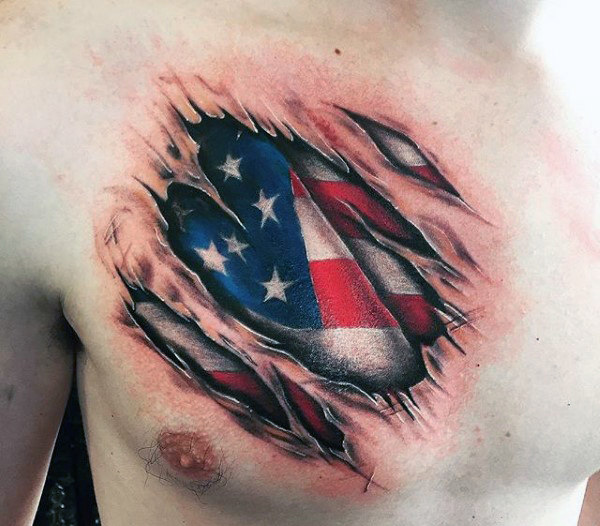 Designs can go a step further as well, integrating the shapes of bone and muscle into the actual design of the flag.

This effect keeps the organic look of the skin rip design but uses the positioning of anatomical features and colors to form the suggestion of the flag. Some designs forgo the use of color or the actual physical outline of a flag, instead just borrowing elements from any emblems on the flag, like this Mexican flag tattoo (above). This works well for flags that have a prominent symbol or picture as opposed to an arrangement of colors and lines.

Many flag tattoo designs also pair the flag (or its iconography) with text, often a patriotic slogan or some sign of affiliation.

This is particularly popular for those who have served in the military. Flag tattoo designs are a way to show off one’s total pride, far more effective than carrying a miniature flag wherever you go. They serve as a constant reminder of who you are and where you came from.